PCR tests work by detecting specific genetic material within the virus. It amplifies a specific DNA sequence, targeted by the so called Primers, by rapidly make millions to billions of copies in successive heat cycles (very prone to fail due amplified noise).

The RT-PCR sample is considered positive if the test finds both genes, inconclusive if just one gene is found, and negative if neither gene is detected. Once a sample arrives at the lab, researchers extract its nucleic acid, which holds the virus' genome. Then, researchers can amplify certain regions of the genome by using a technique known as reverse transcription polymerase chain reaction.

So the key point here is: which are the gene sequences to be targeted? Are they exclusive from the 2019 virus or can appear anywhere else ?

Here you find the primers and seeked sequence supposed exclusive from 2019 coronavirus:

How can this be understood by a dummy? Let me explain: the test searches on the fluid sample,
among others, next RNA sequences codified in genes that produce specific proteins, released from the Wuhan cluster that are described as exclusive from 2019-nCoV:

Do you get it? RT-PCR is reading in the blood some RNA strings supposed specific from 2019-nCoV in order to trigger escalated reaction and say: "yes-you are 2019-nCov positive"

But has it sense? What happens if these strings may appear also in other virus or on RNA human cells? It will trigger false positive.

Let me do one test, i will get first RNA sequence from Orf1ab gene aaacatacaa and search on GeneBank. What i get? Surprising: this sequence belongs to a homo sapiens gene C1orf109 that you can buy on the clone maketplace by some hundreds dollars. 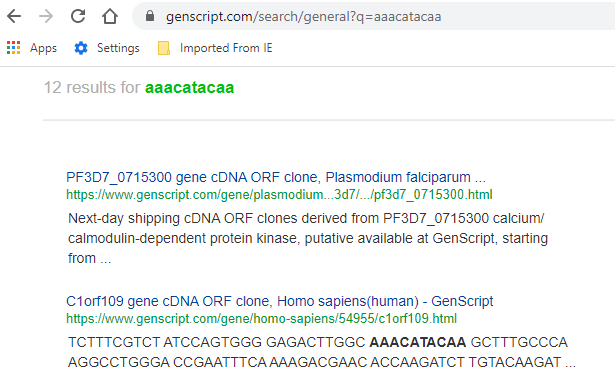 Now let's do same with catgtgtggc: 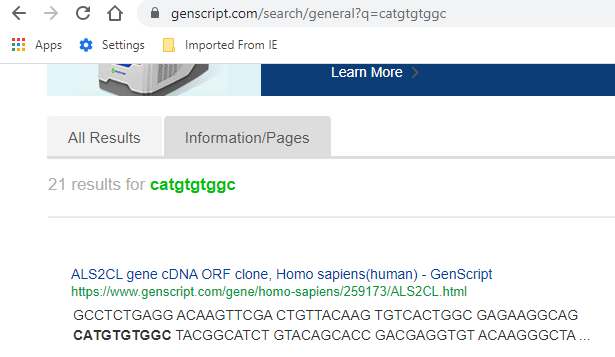 Try yourself to do the exercise, get all gene sequences used on RT-PCR as markers for the 2019-nCoV and you will find all of them appear or are very similar to another human gene sequences. This has sense since RNA sequence codifies gene that generates specific proteins, so similar proteins no matter if generated by virus or human has to have similar sequences. Building blocks of the life are common across species.

Here the funny thing. This sequence already existed on a older Coronavirus on 2015

"A set of probes for detecting Coronavirus by real-time PCR. The kit should consist of Applied Detection Primers.Biosystems (cat. No. 4304970) 5 ’FAM-CCAggTggWACRTCATCMggTgATgC-3’, the Supplier must provide training onuse of primers and probes and interpretation of real-time PCR results. The kit must be supplied withobserving the temperature regime of -20 ° C"

So another primer ACGATTGTGCATCAGCTGA from COVID-2019-2 can be found on BLAST gene database on Homo sapiens chromosome 2, GRCh38.p12 Primary Assembly, differing only 3 basis.

A) RT-PCR TEST TO DETECT 2019-NCOV IS NOT RELIABLE SINCE DETECTS VIRUS SEQUENCES THAT ARE EQUAL OR VERY SIMILAR TO OTHERS BELONGING TO HUMAN GENOME OR OLDER CORONAVIRUS. SO IT IS NOT SPECIFIC FOR THE 2019-VIRUS. It means that being positive only confirms that you are human or you may have the older flu.

B) Same official sources assert that: Detection of viral RNA may not indicate the presence of infectious virus or that 2019-nCoV is the causative agent for clinical symptoms.

So what the fuck is that fake test where you can buy primers on the marketplace? It's an excuse of Pharma industry and States to mark you as carrier, steal your freedom and force you to take forever expensive antivirals, well demonstrated immunosupressors, that eventually can kill you.

Recommendation: DO NOT DO TEST, ignore the outcome if you are healthy. Only go to Hospital if you have serious symptoms.
Publicado por Pere Ciurana en 9:30 No hay comentarios:

2019-nCoV: the final harmless natural pill that will cure it

The treatment that may have to be applied on Hospitals is:

a) do not use oxygen masks since may poison carriers, only on severe cases and no longer 30 minutes day.
b) do not apply any kind of drugs, only facilitate breathing to pacients and control fever
c) analyze bi-hourly the serum ferritine in order to detect Cytokin Storm
b.1) if yes, applies product HEMITHEA intra-venous and apply electrical stimulation of vague nerve
b.2) if Cytokin lowers, stop applying HEMITHEA and allow pacient rest without any treatment

Anyone can produce it, it's free and no patent, since the aim is to help humanity, not produce turnover. It contains 500mg of 2-deoxy-D-glucose (2-DG) covered of grain fibers. It is not a drug, it's manufactured sugar with natural additions. Can be ingested via pill or directly to blood as a diluted solution. The aim is to fasting metabolism in order to modulates the IL-12/IL-10 cytokine balance, establishing novel targets for metabolism-based immune-modulation.

How to massively put  it on market?

In order to test safety of the product (is entire sugar and natural, no drug) is needed to perform a trial on 1000 persons older than 60 with mild and medium 2019-nCoV symptoms with 2 pills days, 2 groups (one placebo) and analyze the evolution during 2 weeks (blood pressure, t-cell level, viral charge level, IL level, hear beat, O2 blood level).  If successful and no side effects, next trial has to be done against 100 persons older than 60 with severe respiratory symptoms.

What about current treatments ?

Receiving corticosteroids did not have an effect on mortality, but rather delayed viral clearance. Therefore, corticosteroids should not be routinely given systemically, according to WHO interim guidance. Further evidence is urgently needed to assess whether systematic corticosteroid treatment is beneficial or harmful for patients infected with 2019-nCoV. No antiviral treatment for coronavirus infection has been proven to be effective.

SUMMARIZING: AVOID AT MOST ANTIVIRAL, CORTICOSTEROIDS AND ARTIFICIAL VENTILATION. THEY DON'T WORK AND EVEN CAN KILL YOU FASTER.
Publicado por Pere Ciurana en 4:43 No hay comentarios: